The final proof copy of my God Puzzle book has arrived. All seems to look OK so I’ve made it available here.

Most of the content is available for free here (along with several short videos) so no need to buy unless you want a handy printed version. The book also has space for jotting down any thoughts you might have in response to each section and the questions posed.

Actually, I always envisioned it as a coffee table book so I might look to publish a really glossy hardback version. Printing cost is huge, though, so I’ve produced this cheaper version first.

Several years ago I jotted down a few things that together pointed me towards the existence of God, or at least encourage me that my belief in God is a reasonable one.

If you are interested you can find a short description of over a dozen of them on a website here. I have been making most of them into short 2-3 minute videos and have just ordered a (hopefully) final proof copy of a booklet version of them which will be available through Lulu.com.

The next phase is to produce a short 5-10 minute commentary video for each one where I unpack them a bit more. I will also talk a bit about the images and animations I chose to illustrate them with.

Here is a video trailer I made for the project a couple of years ago. I remember having some fun and frustration that Christmas making the puzzle pieces in blender:

Started with an idea to use a clapper board. 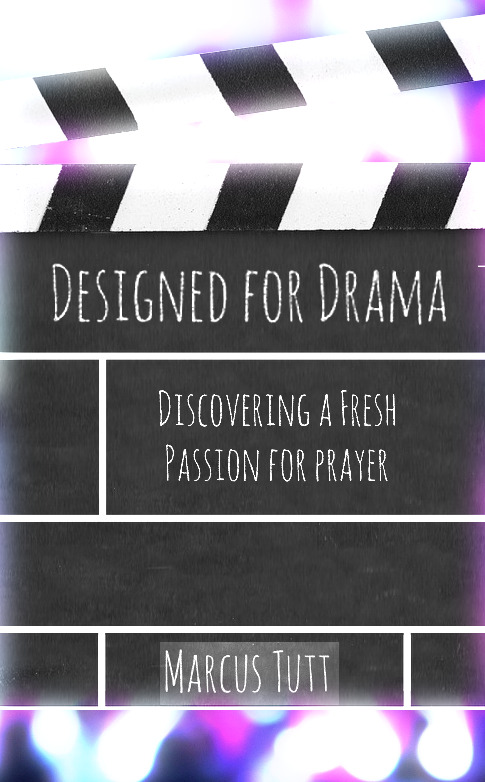 but it wasn’t quite working.

Tried some ideas around praying hands (these are from Oral Roberts university). Never worked.  Thought about a simple design around a movie reel of some sort. Then  found an image of a movie film strip that had some dynamics to it, added a person praying, some lighting effects (evoking the light of a projector), and some interesting fonts: a blueprint one that I adapted and a starwars one someone had done. 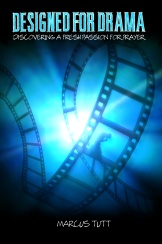 Couldn’t get a commercial quote on the Starwars one and in the end I decided that the blueprint one looked too scruffy. So I used frees ones and filled the large font with a blue grid to hint at design. Bought the stock image of the movie film at higher resolution, re-did the lighting more carefully and bingo.  I’m happy with that.

For the back I found a free image of light illuminating smoke. Altered the color pallet to be more bluey to match the front cover (harder than it might seem). Then added text. 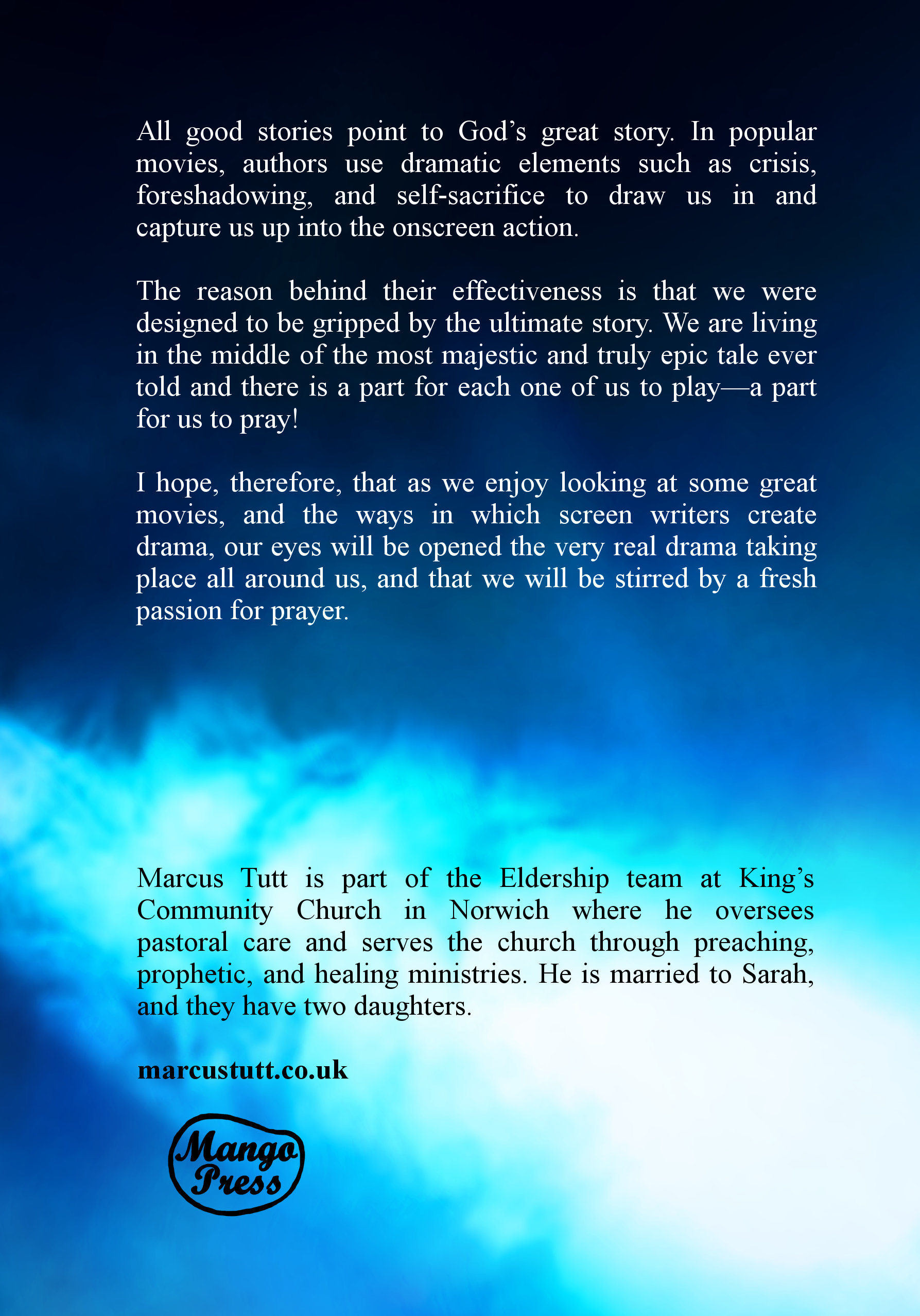 Trouble was, they both looked rubbish when the book came back from the printers.

Apparently the conversion to CMYK (needed for printing) was responsible. Only now, at the end, do I understand. gimp is good but not not that good. It does not do real-time CMYK, ie you can’t work in it. You can only export it and see what it might look like.

A quick experiment using this site seemed to show that red colours were less susceptible to fading and changing in the conversion process so I did a quick mock up of a hotter version. I also zoomed in on the person a bit more to give the prayer prominence. It also seemed to give the image more dynamism.

I then had a sleepless night worrying about the font size being too small and the blue grid jarring with the orange. Next morning I came up with this:

Pow! So much better. More impact. More dramatic. My concern now is what it will look like when it is printed and will there be much horrid color banding going on?

Nope, printed great. Just not sure about the small writing of the subtitle. What about this: 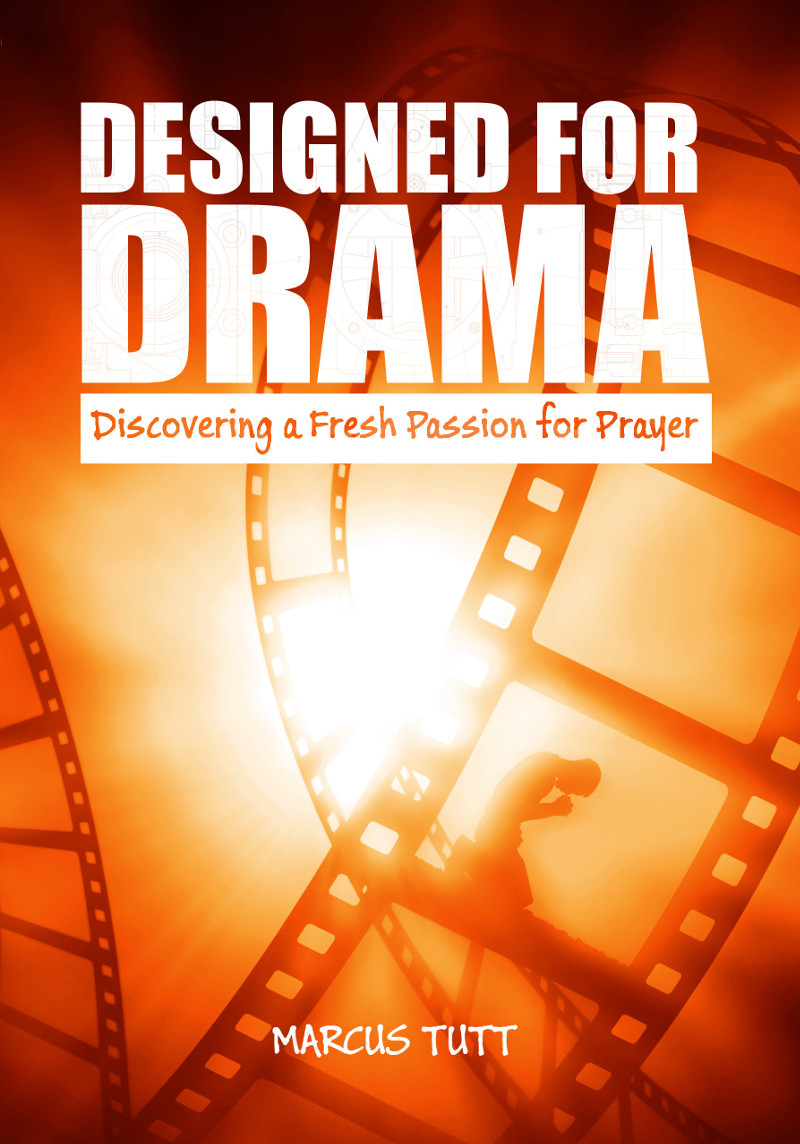 Not sure. The white rectangle is too big or the text needs to be in capitals….

Here is the back cover: 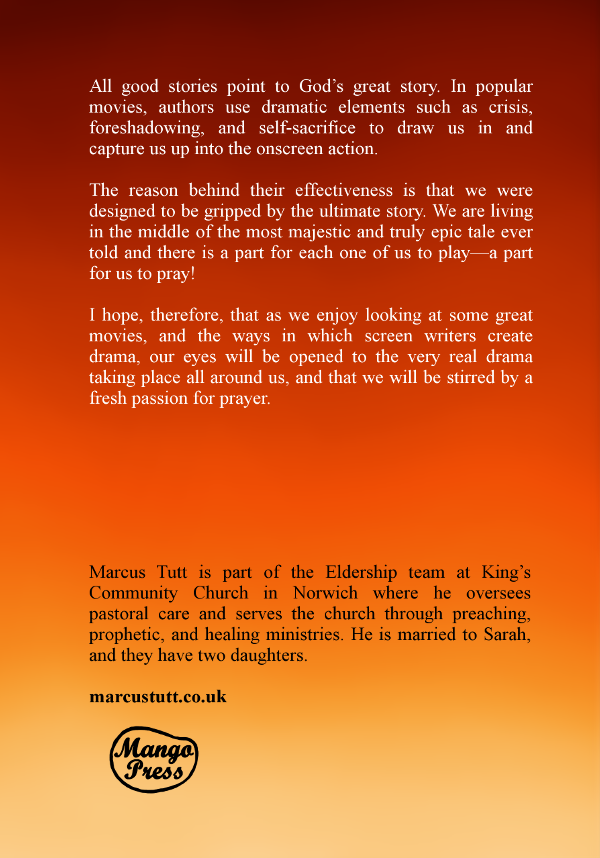 A bit plane but will do for now. Really, I need some quotes from people saying nice things about the book but no one has read it yet.

Aristotle said, “We are what we repeatedly do. Excellence then is not an act, but a habit.”  From UCB word for today

“To stay away from Christianity because part of the Bible is offensive assumes, if there is a God, he wouldn’t have any views that upset you.” Tim Keller

“Men despise religion; they hate it, and fear it is true” Blaise Pascal

“With the single exception of Homer, there is no eminent writer, not even Sir Walter Scott, whom I can despise so entirely… It would be positively a relief to me to dig him up and throw stones at him.” George Bernard Shaw (1856-1950) Shaw “was the first person to be awarded both a Nobel Prize and an Academy Award, receiving the 1925 Nobel Prize in Literature and sharing the 1938 Academy Award for Best Adapted Screenplay for the film version of Pygmalion.” Wiki

This was one of 5 points that GeenStijl puts to Jordan Peterson as a summary of his philosophy. (another was “minimise your persona, cultivate your essence, and live in its closest possible proximity”).

I like the first quote because it captures something I am currently exploring and writing about in notes for a future project “The God Choice”. If there is a God, (see The God Puzzle) then which God is the real God?

One key deciding principle, I think, is that to the extent that we are seeing straight, the most glorious concept of God must be closest to the truth. If we see two concepts of God and it turns out that the duller one is the real one then, again, if we are seeing things right, the deity of the lesser existent God is impugned by the greater, all be it imaginary, vision of God.

Further, the mind that conceived of the greater being becomes somehow more magnificent than the lesser God that actually exists. Its an idea that seems related to ontological argument but for me while proving less, seems more persuasive.

My first book is finished! Click it to find out more

The God Puzzle: Piecing together a picture of God Images and video from my virtual universe

Coming soon….my thoughts as I watched the two friends debate 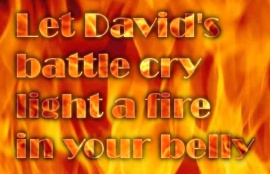 Follow my experience of learning a little New Testament Greek

Blogs from the past

He's behind you!
I've never seen anything like it in my life!
They are not just for sailors
Abram's pants on fire
Divinely tripped up

Book or Album of the Week

Blogging through the Bible